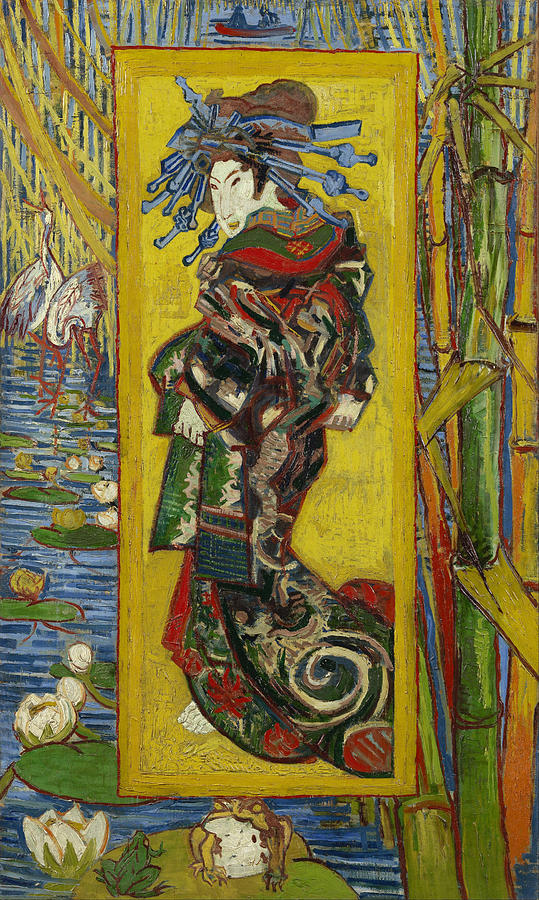 Vincent van Gogh Courtesan: after Eisen
1887 Fine Art Painting
Japonaiserie (English: Japanesery) was the term the Dutch post-impressionist painter Vincent van Gogh used to express the influence of Japanese art.
Before 1854 trade with Japan was confined to a Dutch monopoly and Japanese goods imported into Europe were for the most part confined to porcelain and lacquer ware. The Convention of Kanagawa put an end to the 200 year old Japanese foreign policy of Seclusion and opened up trade between Japan and the West.
Artists such as Manet, Degas and Monet, followed by Van Gogh, began to collect the cheap colour wood-block prints called ukiyo-e prints. For a while Vincent and his brother Theo dealt in these prints and they eventually amassed hundreds of them (now housed in the Van Gogh Museum, Amsterdam).
The May 1886 edition of Paris Illustr� was devoted to Japan with text by Tadamasa Hayashi who may have inspired van Gogh's utopian notion of the Japanese artist:
"Just think of that; isn�t it almost a new religion that these Japanese teach us, who are so simple and live in nature as if they themselves were flowers?"
"And we wouldn�t be able to study Japanese art, it seems to me, without becoming much happier and more cheerful, and it makes us return to nature, despite our education and our work in a world of convention."
The cover carried a reverse image of a colour woodblock by Keisai Eisen depicting a Japanese courtesan or Oiran. Vincent traced this and enlarged it to produce his painting.
Beautiful Asian style vintage fine art painting wall decor.